It might be a new decade, but nothing has changed with my coffee addiction.

I'm 99% sure I started drinking coffee when I was around 7, so I've had a strong 12 years to build this obsession of mine. Moving away to college from my hometown in Mississippi, where the best place to get coffee is McDonald's, to a city that has coffee shops left and right was a culture shock in the very best way possible.

A few weeks into college, I applied to be a writer for Spoon Arkansas, and my first idea (one that I'm still working on) is trying every coffee shop in Fayetteville. But like I said, there are SO many coffee shops in the area- I've settled on 20 places to go to and that's not even near all of them. It's taken a whole semester and a whole lot of money to try the ones I have-- and even then I haven't gotten to all 20 yet.
I have however, found my favorites of the bunch that I've had the chance to try so far, so I thought it would be fun to share five places that I have gladly given an embarrassing amount of my money to in the past few months. These are my favorite first because of the coffee, but also because of the study space, atmosphere, and location to campus. My coffee order lately has been an oat or almond milk latte, so the coffee reviews are based on those drinks, for the most part.

In no particular order:

1. Doomsday Coffee and Roasterie
Doomsday would be my absolute favorite if the coffee was a little bit stronger, but in reality it definitely serves the lesser of the brews of these five places. That being said it's still really, really tasty. The atmosphere, menu, and location of Doomsday is what makes it my favorite study spot/coffee shop. The overall vibe is kind of gloomy and war-themed (okay so that doesn't sound appealing, but it just has a really cool feel to it). It's located right next to campus, so I can easily walk to it and not have to worry about paying for parking. Now... the main reason why I love this place so incredibly much is because of the menu. Doomsday is the only coffee shop that serves two of my favorite things on earth--coffee and Mexican food. Specifically, tamales and tacos. They have the best breakfast tacos, let me tell ya. Typically I don't think of Mexican food and coffee as the most appetizing combination, but for some reason it works here.

2. Puritan Coffee and Beer
Puritan is a more popular and well-known spot in Fayetteville, so it's definitely one of the more social and trendy ones. It has two levels, a ton of seating, and they have a lot of breakfast/lunch options (toasts, smoothies, breakfast sandwiches, salads, etc). My favorite place to sit is on their little vine-wrapped patio that overlooks Dickson Street--it makes studying much more bearable for sure. 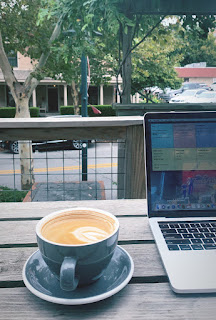 3. Onyx Coffee Lab
Onyx has the best (aka strongest) coffee of all in my opinion. It has a really good atmosphere--kinda edgy kinda dark, but still nice and cozy. The only downsides are that seating is limited and it's not as close to campus as the other ones, coming from a student POV. If you're feeling a little more festive than just a plain coffee or in the mood for something sweet, the mocha is honestly the best thing on their entire menu. It's made with melted down dark chocolate, espresso, milk (I always go with oat), and the final touch is freshly ground sea salt right on top-- I'm telling you it's heavenly.

4. The Commons Bar and Cafe
The Commons Bar is a new addition inside of Theater Squared. I love this one because it's MASSIVE and has lots of windows to let natural light shine in. I also love that its novelty has kept its rep on the down-low so far, so not many people think about going here. It's a good place to get away from campus without actually leaving campus too far, and for non-college students its also just a unique and aesthetically pleasing place to grab some coffee and food. Unlike the other places mentioned, I've only been to The Commons Bar once, so I can't speak for anything other than the nitro cold brew coffee--which is probably one of the best cold brews I've had to date. Their hummus is also bomb. 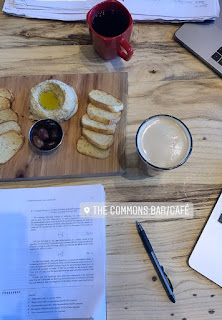 5. 7Brew Drive-Thru
Okay, so I can't talk about all of my favorite coffee shops without mentioning 7Brew at least once. It's not technically a coffee shop, but I couldn't not include it. It being a drive through makes it so convenient for grabbing coffee on the go, they have the largest sized "large" cups I have ever laid my eyes on, the coffee is ridiculously smooth tasting, and they serve the best iced lattes in the world. A lot of people I talk to don't actually like 7Brew, claiming it "doesn't taste like coffee," but that's only because everyone is drawn to the flavored, dessert-like drinks. While probably insanely decadent and delicious, they definitely don't resemble the color or taste of coffee-- more like sugary-milk. The best way to order there is to get either a plain iced latte or a plain iced latte with "1 scoop" (not sure why everything is measured in scoops) of honey if you can't part with a sweet drink. There's nothing wrong with their hot drinks, but they're just average in my opinion. I'm not going to lie... the majority of my money spent on coffee is spent at 7Brew, and I have zero regret about it. 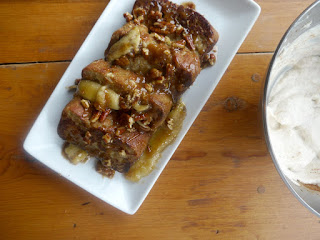 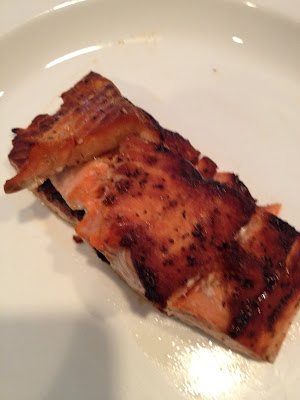