Happy Wednesday!
This big bowl of cheesy pesto pasta is a MUST to help you get through the rest of the week. 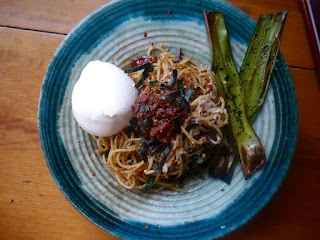 And it can be whipped up in less than 30 minutes. It's seriously the easiest pasta recipe I've ever made. 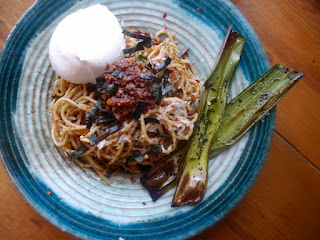 Burrata has been super trendy in the food world lately. Actually, cheese in general has. And it deserves all of the time in the spotlight it's getting. There aren't many things better than warm melty cheese. Okay, well chocolate is, but still.
I've been wanting to try burrata since I first heard of it, but none of the stores carry it where I live. It just sounded so magical... I mean mozzarella stuffed with more mozzarella?? I had to get my hands on that.
Finally, the other day while I was out of town I stopped in Fresh Market and picked up a couple of balls of it. I immediately knew it would taste amazing over a big bowl of pasta, so that's exactly what I did. 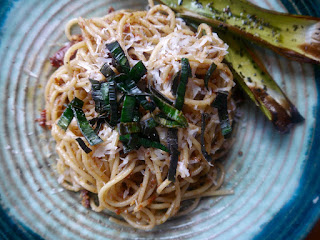 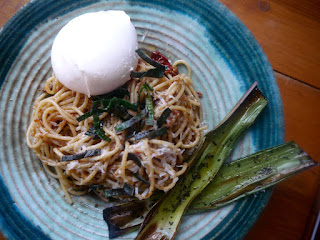 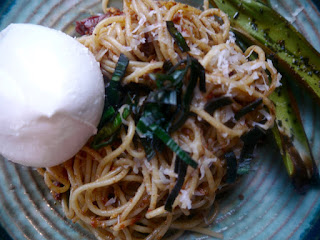 To make the pasta I just took the leftover Sun-Dried Tomato Pesto from my Savory Breakfast Bowls I made yesterday, tossed it with some spaghetti, topped it with some crispy fried leeks for a little crunch (and green) and a big ball of creamy burrata... and there you go... the quickest and yummiest one pot dinner.
I'm always looking for new ways to use leftovers too, so this is the perfect way to use up that yummy pesto. 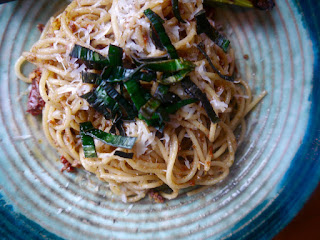 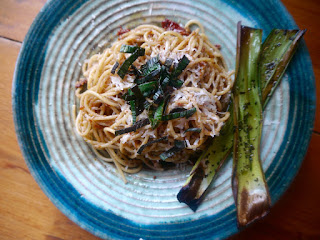 So the steps to making this pasta go like this:

I like to roast leeks whole with oil, salt, and pepper, and just eat it on the side with it, but that's totally optional. 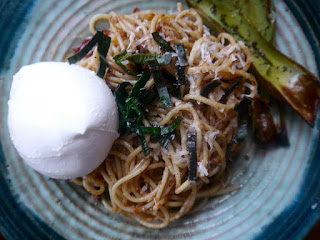 It doesn't get simpler than that, while still being packed with flavor, at least. And the best part is is that it can all be made in one pot! I know my parents probably LOVE that... when I cook, it can get very messy.

Even if you don't have the pesto already made (which you should-- it's addicting), it can be made in a food processor in 2 minutes. So, there are no excuses for making this dish. 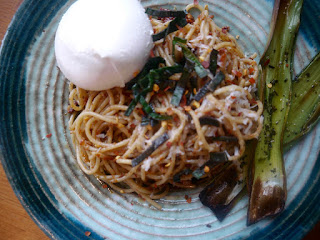 Well, unless you live in a place like I do where you can't get burrata. In that case, just use some slightly melted mozzarella-- but the burrata really does take it to the next level. 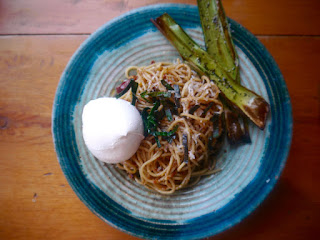 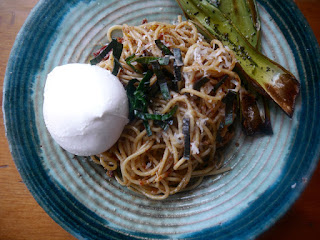 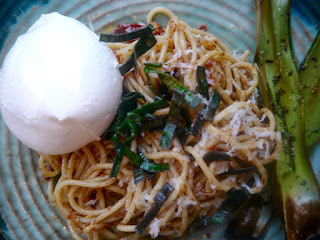 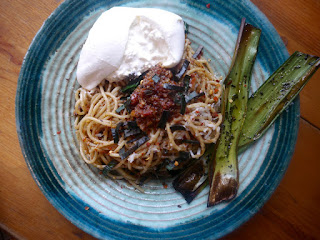 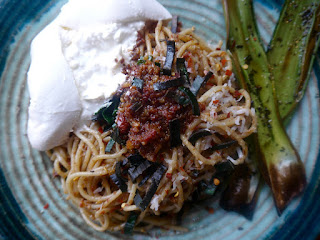 Cook the pasta according to the directions on the box, or until al dente. Make sure to salt the water well. Drain the pasta, put back into the pot, and add pesto. I like to use a lot of pesto (about 1/2 cup or enough to coat the pasta well), but use however much you like. Keep on low heat, tossing every once in a while, until ready to serve.

Heat enough vegetable oil to coat the bottom of a small skillet until sizzling. Add the leeks, and fry until they start to turn brown (30-45 seconds max). Take out, place on a paper towel to drain the oil, and sprinkle with salt. 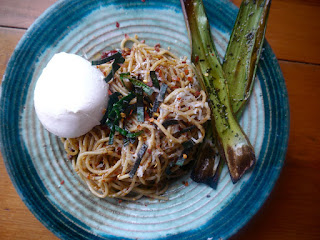