So... I’ve been in New York this past weekend! 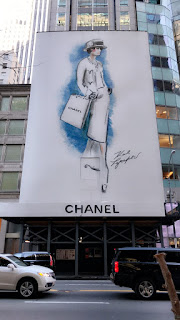 My dad had some work stuff to take care of, so my mom and I tagged along to take a little vacation and tour NYU. New York (next to New Orleans) is one of my favorite cities, especially when it comes to food. There are so many new and innovative restaurants and cute little coffee shops it’s overwhelming. I’ve always been so fascinated with cafés, bakeries, meat markets, or small artisan food shops, and New York definitely doesn't skimp on them. Literally, every street corner I turn on there’s one sitting there, waiting for me to go blow my money on more coffee. I somehow manage to try or at least go into all of them.


I also coincidentally finished watching Gossip Girl for the... third... or fourth... I'm not exactly sure... time while on this trip.

Anyway, I thought I would take you through all of our SUPER tasty meals we had while on this trip. I didn’t get pictures of everything, but I did get most of what I ate.

Starting with Friday, we flew in and went straight to the hotel to freshen up before meeting more family at Avra Estiatorio, an absolutely amazing authentic Greek restaurant. It was actually really funny because my dad thought it was an Italian place when he booked the reservation, so we were all surprised when we got there. It was definitely a good surprise, though (Mediterranean food is my absolute favorite). Avra Estiatorio is best known for their fish, so most of us stuck to that when ordering. 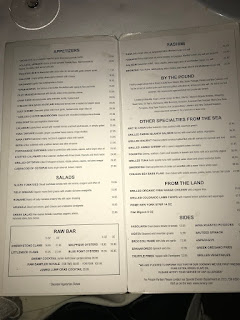 Everyone’s food was delicious, but my meal was by far the favorite of the table (including mine). It almost tasted like a beef stew; it had a really rich tomato “broth” with lots of paprika notes. The Plaki, a Turkish meze, really took the flavor to the next level! The fish was cooked perfectly, too. If you're in NYC, this restaurant is A MUST for amazing and authentic Mediterranean food.

Saturday morning, my mom & I got a smoothie and a juice from The Juice Shop before a late lunch. 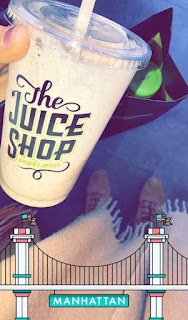 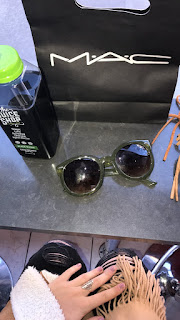 My uncle and dad met my mom and myself at Brasserie Athenee, a French-Mediterranean restaurant, for lunch.

Saturday night, we went to Tribeca Grill with some friends for dinner. For appetizers, we had the Grilled Octopus, Lamb Meatballs, and the Steak Tartare. 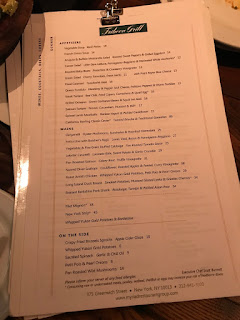 I had the vegetable soup of the day, which was made with a kelp broth and it was so delish! For my main course, I got fish stew (yes, I got the soup and the stew), a special that night, which I probably should’ve known was a mistake to get at an American restaurant. I am a huge fan of bouillabaisse--and this one wasn’t terrible--but I’ve had much better.


For dessert, we had the cookie plate, banana tart, and chocolate cake.

Okay, let me just say one more thing I love about (most of) the restaurants in New York. A ton of the restaurants have a “cookie plate” of some sort on their menu, and I think that it just the best idea ever. If it were up to me, all restaurants would have a cookie plate for a dessert option. And even better, it would be complimentary.

Sunday morning we woke up and went to the MOMA for a while. After, we had brunch at Pazza Notte. I got the Eggs Benedict Norwegian style, with dill smoked salmon. It came with a side of (really good) fries and truffled greens.

After brunch my parents and I went to see Kinky Boots on Broadway and it was incredible! Honestly, it has to be one of my favorite musicals I’ve ever seen (next to Memphis).
I picked up a turmeric latte with almond milk at Pret à Manger, which is kind of like a chain café with quick pick up food found all over New York. 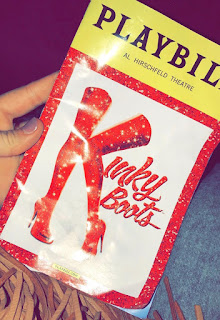 Sunday’s dinner had kind of an unfortunate turnout. We went to Maialino’s, which we’ve heard is a super good Italian place, but we must have gone on an off night. First, they were out of SO many ingredients, so a lot of the dishes were unavailable. Next, the service was really slow, although our waitress was really nice and tried her best to make up for the kitchen’s flaws.
For our appetizers, we got a cheese board, the Zucca, and.... the pig’s head. With teeth and ears and all. It was a little terrifying, I will say. Honestly, it was extremely fatty and a little gamy tasting, so it wasn’t my favorite.
The squash and the cheeses were phenomenal, though!


For my main dish, I had my heart set on the squid ink pasta, but of course, that was the many things that they were out of. I ended up getting carbonara with Tonnarelli instead of Spaghetti noodles because I’m not big on super thin noodles. The only other time I’ve had carbonara I didn’t like it, so I was a little skeptical about this one. I thought it was okay, but it wasn’t anything worth hyping up, for sure. The cheese was really strong and overpowered everything else, but the homemade Tonnarelli was amazing. My mom’s Malfatti dish was insanely tasty, as well. I definitely recommend getting that if you give it a try.

For dessert, we had the lemon tart and the apple crostata. I also had a cacao chai latte with house-made oat milk: SO DEVINE! Again, me spending more money on coffee and stuff.

Overall, I thought it was okay... Not the best experience, but definitely not the worst experience.
I’m sure it’s much better than I’m making it out to be, though. Hopefully, they were just going through a rough patch this weekend. 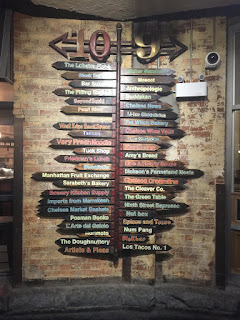 Monday morning, I forced my parents to wake up early and go to Chelsea Market. I’ve always been obsessed with the idea of Chelsea market, even though I had never been until this week. I mean it’s basically a mall just for food, so how could I not love it? And it lived up to what I had dreamt of it, for sure! It seemed like there were infinite shops, restaurants, and food “trucks” set up. There's no doubt that I could totally live there. 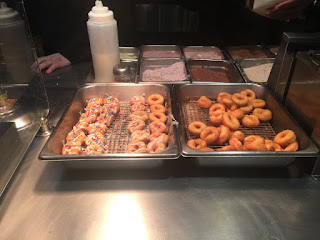 First, we went to "Doughnutery," where they make the donuts right in front of you! Of course, we had to sample a few. I can definitely say that it was mini donut heaven.
I wanted to "eat my way through" the market, trying a little bit from each place, but after we sat down to eat lunch at The Green Table (a farm to table restaurant), I was so stuffed. 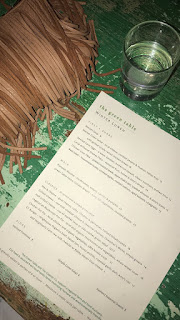 Next, I bought some chocolate pistachio halva, a middle eastern dessert made out of nut paste (in this case tahini), from Seed + Mill. Then, we were going to get gelato there, but I convinced my parents to go to Fresh Pressed Juicery to get “ice cream” there.

I’ve seen this place all over Instagram and other social media, and if you know me, you know I love anything related to smoothies and juices! Basically, Fresh Pressed Juicery takes cold pressed almond milk and juices and turns them into “soft serve.” AND IT IS SO GOOD! We went on a witch hunt for this place, which probably drove my parents crazy, but I thought it was so worth it. I got chocolate and vanilla (almond milk base), with mini chocolate chips, toasted coconut shreds, raw almond butter, and cacao sauce.
The only ingredients in it are almonds, dates, sea salt, and water. It's also very Instagrammable. 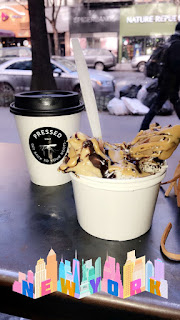 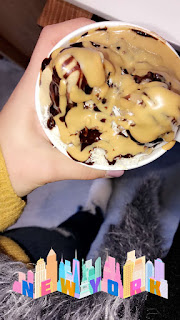 After that, we walked around NYU’s campus for a little while. I fell so in love with it. Who knows, maybe I’ll end up there in a year! A girl can dream.

Okay, so the last dinner we had before we left was at Scarpetta. It was such a good choice for our last one, too. All of the homemade pasta is to die for, and everything else we ate was delish. I ordered the scallops and the “black pasta,” made from squid ink, which was a MUST for me to order because they were out of it at Maialino’s the night before.

For dessert, we went all out with the cheesecake, espresso budino, chocolate cake, and apple tart. As we all know, I'm such a huge dessert fanatic, so I was in heaven with every single bite. It was definitely a good end to all of our food endeavors over the past few days. 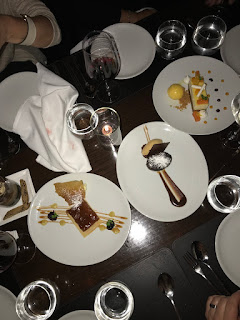 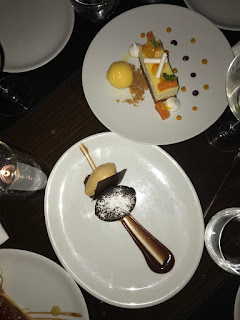 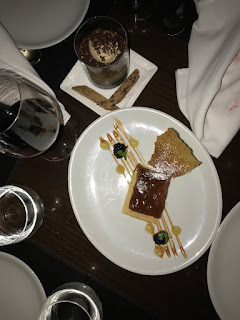 Alright, so after all of the amazing food was stuffed away and my wallet was practically emptied out from all of my un-needed lattes, we had to head home (sadly). But don't worry, I’ll be heading to New Orleans, my all-time favorite city, in a couple of weeks, so look out for a post on that trip! 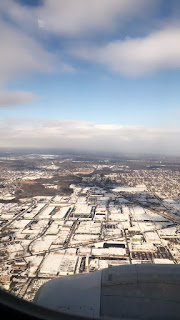 Okay.. maybe I've spent too much time in New York.