Since Food Network Magazine predicted Shakshouka as one of the most trending foods in 2017, I had to make it, right? 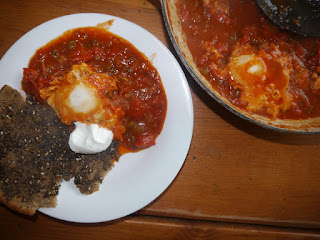 I think so. So, what is it? Basically, it's a Middle Eastern dish of poached eggs in a tomato sauce. But, trust me when I say it tastes a whole lot less boring than it sounds! Seriously, so much flavor in one dish. I currently am so obsessed with Middle Eastern and Mediterranean food. It's always been my favorite cuisine, but this past year I've gone a little crazy with the Greek and Med flavors... Hey, I'm not complaining, though. You really can't go wrong with any food from that region, and it seems like the dishes you can make are endless. There's always a different underrated dish that seems to grow popular and become a staple in my life, like this dish! 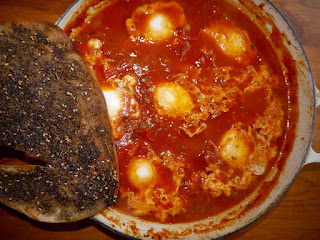 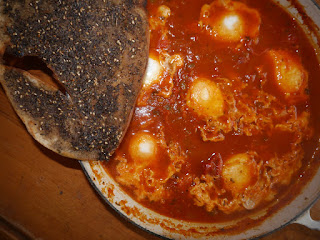 So, back to the Shakshouka... 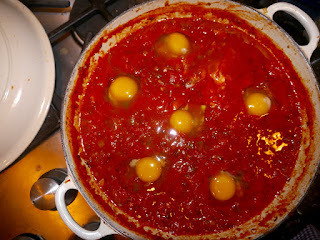 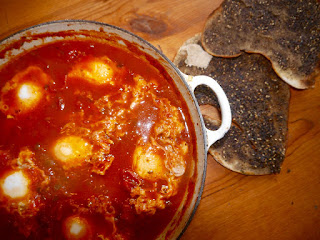 I've never made it until now, but I've seen it everywhere lately, hence it becoming a very trendy food. It really was so simple to make with an especially easy clean-up, since it was all made in one dish.
To me, this dish is all about developing layers of flavor in the tomato sauce. If you don't create a deep flavor palette in the sauce, it will just taste like canned tomatoes, which is another reason why I LOVE using the fresh roasted tomatoes. Honestly, you can't argue with the fact that fresh tomatoes are better than canned. They just are, and they make any tomato dish better. The fresh parsley, spices, citrus of the lemon, and smokiness of the roasted tomatoes really transform this whole dish into being something exceptionally special and delicious. 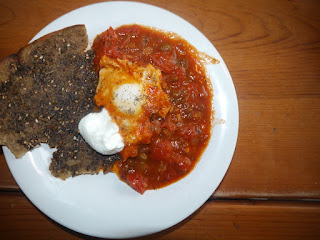 Although I love the sauce, my favorite part of the dish is definitely the Man'oushe. Man'oushe has quickly grown to become one of my favorite foods. It's essentially a Lebanese toasted bread with Za'atar paste, and it's amazing, to say the least. Since it's typically used with flatbread, I went with some homemade pita, which by the way is divine beyond words! I've always wanted to make homemade pita, and it was so incredibly easy. I struggled with it rising properly, but luckily it didn't even affect anything. 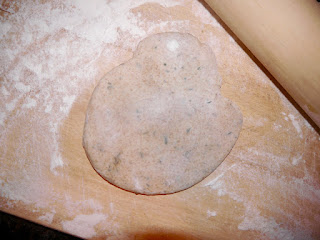 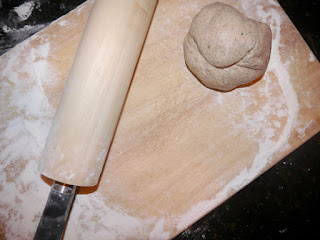 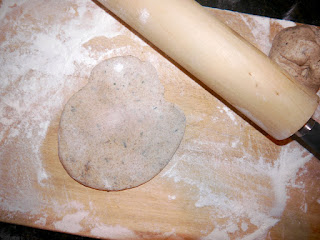 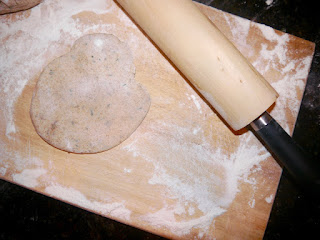 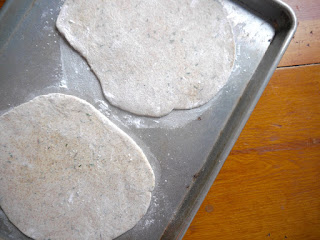 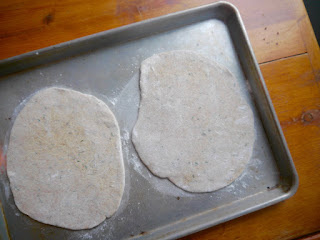 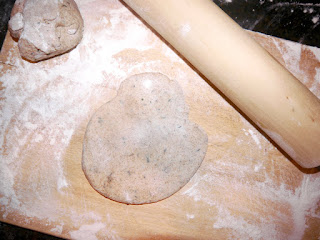 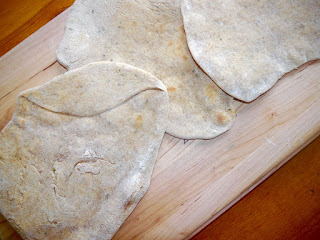 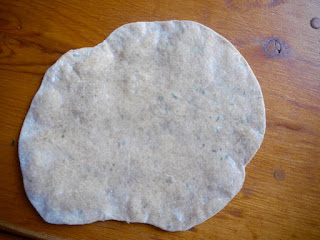 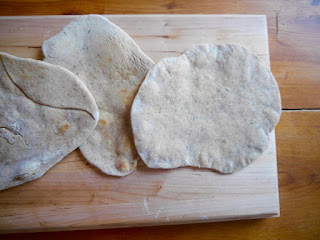 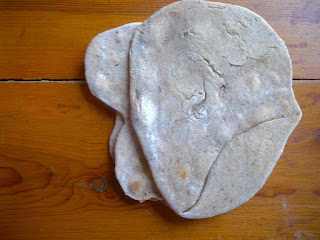 Anyways, back to the Man'oushe. Za'atar is by far my favorite seasoning at the moment. It's a mixture of sesame seeds, spices, and sumac, and if I do say so myself, it makes EVERYTHING taste better. It's especially tasty on eggs, however. 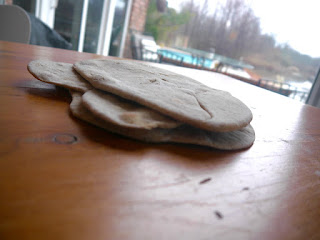 This is also probably my favorite lazy-Sunday brunch meal, by the way... I know, even more so than pancakes!! 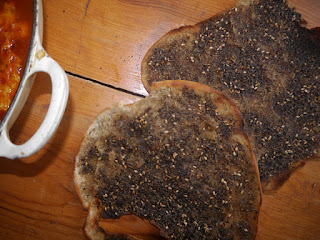 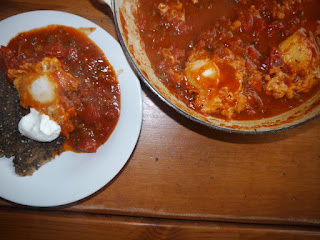 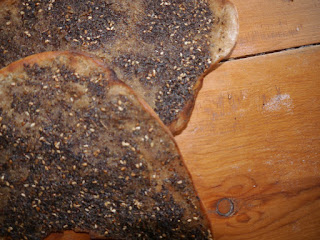 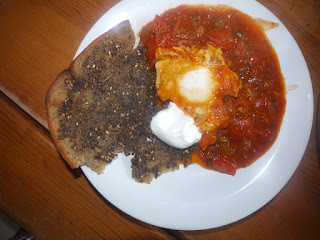 Pour yeast into warm water (make sure it isn't too hot or it will kill the yeast) and stir until yeast is dissolved. Add the wheat flour and 1 cup of the bread flour, 1/2 cup at a time. Stir 100 times or for 1 minute to activate the gluten and then let rest for at least 15 minutes (up to 2 hours). Mix in spices/herbs, salt, and olive oil. Add the rest of the bread flour 1 cup at a time. Once it gets too crumbly, move to a clean flat surface and knead until combined (about 10 minutes). Form into a ball and place in a large, lightly oiled bowl. Cover with plastic wrap or a damp paper towel and let rise until it has doubled in size (about 2 hours). IT IS OKAY IF IT DOESN'T RISE COMPLETELY--- continue to make the pita bread anyways, it will just not blow up as much as it would have if risen correctly.
Roll out onto a lightly floured surface, making 8-16 pitas (around 1/4 inch thick- amount depends on how it rose). Preheat oven to 450º F. Bake 2 at a time on a non-greased baking sheet for 4-5 minutes or until puffed up and lightly golden brown. Let cool completely.

Mix za'atar and olive oil together to get a somewhat runny paste. Brush an even and thin amount on the pita. Broil until the pita looks to be crunchy (about 2-3 minutes) and the olive oil is bubbling lightly. Cool completely before serving (this step is crucial- the bread will crisp up and become less chewy once cooled).

for the Shakshouka:
Pre-heat oven to 425º F.
Drizzle tomatoes with 2 tbs. olive oil and a sprinkle of salt and pepper. Toss to coat completely on a baking sheet and roast for about 20 minutes, or until soft, oozing, and starting to get charred.
In a large and deep skillet, cook the onions, bell pepper, and garlic down in heated olive oil, over medium heat, until completely soft and at least half of the original size. Add chicken stock, tomato paste, crushed tomatoes (if using 2 cups cherry tomatoes), all spices, and vinegar. Cook down for 15-20 minutes on a simmer to cook the canned tomato taste out. Add roasted cherry tomatoes and lemon juice. Taste and more salt/pepper/spices to your liking. Add a little more chicken stock or water if too thick- you want it to be in between a red sauce and soup consistency at this point. Crack the eggs into the pan (crack into a dish first to ensure no shells get in), spaced out evenly. Cover and cook on medium-low for 10-15 minutes (10 minutes: runny yolk; 15 min: soft but cooked yolk). 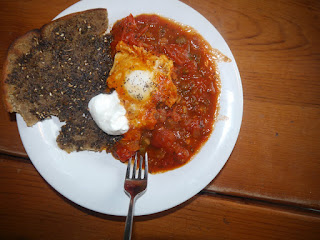